GLASS, PHILIP
THE HOURS (MUSIC FROM THE MOTION PICTURE)
LP

Nonesuch releases Philip Glass’saward-winning soundtrack to The Hours on vinyl for the first time on September 30to coincide with its 20thanniversary and Glass’ 85thbirthday concert season. Originally released in December 2002, Glass’s score to the Academy Award-winning film was itself nominated for an Academy Award, as well as a Golden Globe and a Grammy, and went on to win a BAFTA and a Classical BRIT.

Directed by Stephen Daldry, The Hours is the story of three women searching for more potent, meaningful lives. Based on Michael Cunningham’s 1999 Pulitzer Prize-winning novel, with a screenplay by David Hare, the film interweaves the stories of three women – a book editor in New York (Meryl Streep), a young mother in California (Julianne Moore), and the author Virginia Woolf (Nicole Kidman). Their stories intertwine and finally come together in a surprising, transcendent moment of shared recognition.

Philip Glass’s score was conducted by Nick Ingman, with Michael Reisman on piano and the Lyric Quartet, and recorded at Abbey Road Studios and Air Studios, London. The score was a key element in this acclaimed triptych of dramatic tales. “The inter-cutting of personal stories over a wide span of time,” said NPR, “is held together by a single music approach.

• The Poet Acts
• Morning Passages
• Something She Has to Do
• For Your Own Benefit
• Vanessa and the Changelings
• I’m Going to Make a Cake
• An Unwelcome Friend
• Dead Things
• The Kiss
• Why Does Someone Have to Die?
• Tearing Herself Away
• Escape!
• Choosing Life
• The Hours 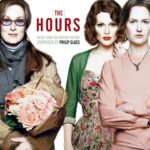 GLASS, PHILIP - THE HOURS (MUSIC FROM THE MOTION PICTURE) - LP