On Natura Morta, Sven Wunder is exploring art as a bridge between nature and the human ability to judge and observe in eleven musical compositions with brightly colored textures and an emphasis on vibrant melodies. Throughout human history, we have depicted the world we live in through art.

By reworking what we see in the world, the simplest things have helped us understand the beauty of nature and to evaluate the material world that we have created around us, as a window to a constantly changing reality, through our own perception. It is that absolute reality that appears in the seam of human and nature and that can be revealed through art. Still life painting, also referred to as natura morta (”dead nature”) in Italian, stretches back to ancient times. Some of the earliest works, found in Pompeii, depict commonplace objects such as fresh autumn fruits alongside man-made objects such as a small amphora and a small terracotta heap with dried fruits.

These two thousand year old paintings give a snapshot of Roman life, and also creates a link to time and space. A slice of life has been created by binding the earth’s pigments with extracts of oil, made from nuts and seeds, painted with brushes, made from a variety of fibers, such as trees and hair from animals. While life wanes with each brush stroke, by shifting reality into past, art exists to make us come alive, being a living image of a dead thing, a surface and a symbol with symbolic powers of its own. Still life works celebrate material and ephemeral pleasures by returning to nature as the ultimate source for our standards in art as well as in life itself. Natura Morta collects pieces from a continuous variety of melodies — supported by a decisive rhythm section — creating a musical kaleidoscope of ever-changing colors.

Sven Wunder brings life into this rich assortment of musical implications by fusing and combining melodic instruments with each other in a setting that spans from a classical to a modern idiom. The author evokes this panoramic portrait by articulating an instrumental dialog between a chamber orchestra and a jazz ensemble. The result is a musical celebration of material pleasures that also serves as a reminder of the brevity of human life. This album was produced with financial support from the Swedish Arts Council. released June 11, 2021 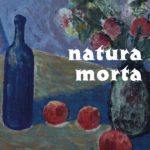