Hot Wax is an assured KPM masterclass from a dream team line-up of Brian Bennett, Alan Hawkshaw and John Fiddy. Here we’re treated to what happens when all three decide to explore “the latest trends in production music”. The latest as of 1976, o

John Fiddy’s numbers are sumptuous, string-led and light. Floaty soft-psych underpinned by a solid groove, particularly on “Taste For Living” and « Fresh Start ». If you’re into Koushik and those early Manitoba/Caribou records – and you should be – you’ll appreciate these.

For us, the Bennett and Bennett/Hawkshaw stuff is on another level. “Capitol City” oscillates between driving funk and downbeat sentiment. “Name Of The Game” is tough, smokin’ funk, famously sampled in 2007 by Madlib for Percee P’s “Who With Me”. “Bop On The Rocks” knocks hard and “Full Throttle” features a guitar solo with some of the nastiest, about-to-explode fuzz you’re ever likely to hear.

As with all ten re-issues, the audio for Hot Wax comes from the original analogue tapes and has been remastered for vinyl by Be With regular Simon Francis. We’ve taken the same care with the sleeves, handing the reproduction duties over to Richard Robinson, the current custodian of KPM’s brand identity.

And don’t worry! Those KPM stickers aren’t stuck directly on the sleeves! 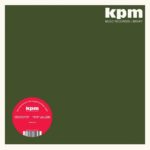