With his new remix album, Deciphering The Message, the Chicago-based drummer, producer, and beat scientist Makaya McCraven digs through the vaults of the legendary jazz label Blue Note Records to put a modern bounce on classics by Art Blakey, Horace Silver, Hank Mobley, Kenny Burrell, and Eddie Gale, among others. The album’s lead single “Frank’s Tune” (AKA “De’Jeff’s Tune”) is available to stream or download today. Deciphering The Message will be released November 19 .

Across numerous albums and mixtapes, McCraven has proven his mastery of the loop akin to hip-hop’s most celebrated beatmakers like J Dilla and Madlib, both of whom also found inspiration in the Blue Note catalog. With acclaimed releases like In The Moment (2015) and Universal Beings (2018), McCraven created his own lane in jazz by sampling his band playing improvised sessions throughout the world, then molding the audio several times to pull contrasting moods from it. For his most recent project McCraven remixed Gil Scott-Heron’s final album I’m New Here into the equally emotive LP We’re New Again (2020).

McCraven has always been a collaborative artist and Deciphering The Message features newly recorded elements from vibraphonist Joel Ross, trumpeter Marquis Hill, alto saxophonist Greg Ward, guitarists Matt Gold and Jeff Parker, bassist Junius Paul, and De’Sean Jones on tenor saxophone and flute. In that way, Deciphering The Message connects the past and present, proving that musicians become legends by trekking the same roads with like-minded creators all moving toward the same goal.

That throughline is evident on the lead single in which Jack Wilson’s hard bop cut “Frank’s Tune”—from the pianist’s little-known 1967 album Easterly Winds—is remade into “De’Jeff’s Tune,” an ‘80s R&B-inspired arrangement with a two-stepping dance groove, wafting guitar chords courtesy of Parker, and delicate flute from Jones. The track opens and closes with the voice of Blue Note legend Art Blakey, the irrepressible bandleader of The Jazz Messengers, addressing his audience: “We want you to leave your worldly troubles outside and come in here and swing… So as the message is being delivered, ladies and gentlemen, you may pat your feet and have a ball.”

The track listing for Deciphering The Message is as follows:

[from A Slice Of The Top by Hank Mobley] [from Whistle Stop by Kenny Dorham] [from A Night In Tunisia by Art Blakey & The Jazz Messengers] [from Horace Silver Trio by Horace Silver] [from Components by Bobby Hutcherson] [from The Memorial Album by Clifford Brown] [from One Flight Up by Dexter Gordon] [from Easterly Winds by Jack Wilson] [from Blue Lights, Vol.1 by Kenny Burrell] [from ‘Round About Midnight At The Cafe Bohemia by Kenny Dorham] [from Indestructible by Art Blakey & The Jazz Messengers] [from Something Personal by Jack Wilson] [from Black Rhythm Happening by Eddie Gale] 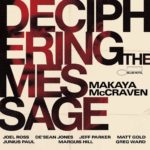