After a few years of only being able to afford to release the occasional single, Nation of Language’s Ian Richard Devaney and Aidan Noell funded their 2020 debut Introduction, Presence with gift money from their wedding (even though, Devaney has said, « Nearly every person we asked this of politely implied it was a terrible idea or that we should go on a honeymoon instead »). When that record did well enough that they could have paid themselves back, the couple instead decided to almost immediately pour the money into a second album. A Way Forward was worth the investment—continuing to embrace the band’s love of ’80s synth-rock classics like OMD and A Flock of Seagulls, but also expanding.

It all kicks off with « In Manhattan, » Noell’s Krautrock-style keyboards racing as if on the Autobahn, while Devaney’s vocals stay in the slow lane; the contrast is mesmerizing. « Wounds of Love » sounds like it could’ve been on the Pretty In Pink soundtrack (alongside OMD and Echo and the Bunnymen), all moody lyrics— »They say ‘walk it off’ but, in my heart/ I was never more than what you said » —and synth that bubbles forth like light waves refracted. Likewise, « Across That Fine Line » perfects the push-pull dynamics between verse and chorus. The Joe Jackson-style electronic drums and Michael Sue-Poi’s throbbing bass keep things steady while Noell’s keyboards roll in like a big wave. Indeed, Sue-Poi is a major force throughout, his rich bottom end surprisingly airy on the upbeat « Whatever You Want. » « A Word & A Wave » is alive, its deep pulse like a heartbeat. With Devaney’s vocals layered and a bit blanketed, pleasantly sleepy « Miranda » feels like a dream you can’t quite pull out of—until Noell’s bubbling-under synth turns into a pretty, aspirationally optimistic melody.

On ballad « Former Self, » meanwhile, the keyboards are like steady rain, haunted by occasional background bleeps and beeps and a slightly industrial churn; it all ends with Devaney vocalizing « ahhhhhhhh » like a release valve. With its running-jog rhythm, churchy keys and catchy bass line—its attack so precise— »The Grey Commute » is irresistible. Finally, « They’re Beckoning » opens with a ticking clock nervousness before the ethereal, spacey synth washes in, only for the ticking to increase, maddening, before it merges into what sounds like the beginning of U2’s « Where the Streets Have No Name » then eases into great, soaring vocals on the chorus. Surprising, and engaging. © Shelly Ridenour/Qobuz 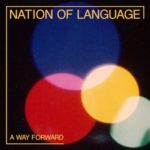