Behind Yann Tambour & his band Stranded Horse lies a faith in chance encounters, a belief that renewal is born out of chaos. They strive to skirt conventions and labels and wed together unexpected genres, rules and habits in an album of erratic wanderings, dance and trance, at a time when more & more get walled in reluctance and suspicion. But a strange spell, it seems, has been cast on our stranded horse when he chose to hit the dancefloor for the first time the very year nobody can.

This is not a lockdown record, much to the contrary, since this new album was conceived before Covid and co invaded our realities and vocabulary. “We wrote a post-visionary album, » say Yann and percussionist Sébastien Forrester jokingly, “an album that predicts the past.” And for good reason, since it is indeed an apocalypse that this Grand Rodeo is about, one that everyone saw coming. One against which our rider holds the reins as best he can so as not to fall, powerless like every one of us, cut off in his tracks with little choice but to let off steam in a frenzied trance or on the rumba beats of his “Stroke Me with a Deadly Arrow”.

. There he is, oddly dressed, a little unwiling, like some indie Don Quixote tilting at windmills with endearing fervor… Yes, the catastrophe is here, before our very eyes, but never mind, this Grand Rodeo remains an opportunity to share and do our best to enjoy ourselves.

Yann Tambour was first known as Encre at the turn of the millennium. He was then whispering and stacking orchestral samples into a kind of spoken word electronica with an acoustic resonance. But in 2005, he decided to return to his early love for arpeggios

and dusted off his classical guitar, all the while growing a fascination for the emblematic, thousand-year-old West African instrument : the kora. He experimented, both in instrument making and playing, developed a very personal style and released two albums that took him to several continents (Churning Strides in 2007 on Blanktapes and Humbling Tides in 2011 on Talitres). Between 2008 and 2012, he even collaborated with one of the great masters of the genre, Ballaké Sissoko, and later met his cousin and pupil Boubacar Cissokho during a trip to Senegal, with whom he wrote the majority of “Luxe” (2016).

Boubacar, a direct heir to the man who once brought the kora from Mali to Casamance where it did not exist before, leaves his inimitable mark throughout this Grand Rodeo, setting Yann’s heady twilight folk into a kind of perpetual motion only known to true Djelis. But this Grand Rodeo doesn’t stop there:

If it takes its first dance steps, it is thanks to Gabon raised Franco-British percussionist (and electronic music producer) Sébastien Forrester’s essential contribution and passion for African and Afro-Caribbean rhythms. For the needs of the group, he designed an atypical pocket drum kit, with doundouns and a gourd he plays with his foot. As for our fourth horseman of the apocalypse, Miguel Bahamondès-Rojas, a fellow traveller on the Luxe tour, who has worked in the French indie scene as well as various projects throughout Latin American, he is the band’s multi-instrumentalist (violin, keyboard) and outstanding string arranger. Grand Rodeo also sees him discover his talent for backing vocals with a timbre that fits Yann’s voice perfectly. Finally, Carla Pallone, Yann’s long-time friend and half of duo Mansfield TYA also adds her contribution via a swirly violin arrangement on track “Le Ciment dessous nos pieds” (also available in English as “The Crumbling Ground Down Below”).

Grand Rodeo, whose binlingual title works both in the author’s native French and the tongue of a Britain that adopted him for a time also evoques the bitterness of seing her slam the door and stoop So Low, even though he is under no illusion as to the dreary path his homeland will soon follow. Here is a song whose melancholy is gradually illuminated by a rich instrumentarium and whose freshness is derived from sounds rarely associated with each other. A perfect example of how Stranded Horse constantly draw on new sources to give life to their rich and unique musical language.

Yann is fond of unusual marriages, leading him to the confines of creole music whose syncretism he reveres, or those improbable revisitations of western music from the four corners of the world that he either gleaned on the road, or discovered through re-releases by pioneers such as Sublime Frequencies, Finders Keepers or Awesome Tapes from Africa to name a few.

But Stranded Horse doesn’t forget to draw on the indie heritage that is still very much present, as evidenced by In A Sharper Fairway, which may remind the most passionate folk fans of the folk-mindedness of Jackson C Franck. As for the choice of English or French, it is a natural one:

whether it’s a question of getting involved in the contemplative and poignant Sparks Turn To Stone or entering the crazy dance of the irresistible Rumba du trépas (also available in English as « Stroke Me With a Deadly Arrow »), the richness of the lyrics is reinforced by a voice stripped of all artifice, making each composition sincere and authentic. The same is true when, with Youssou N’Dour’s permission, Stranded Horse adapts and translates from Wolof to French Star Band de Dakar’s heady and vast Thiely.

Don’t be mistaken, even though after So Low comes So High on this Grand Rodeo, the author, like all of us, struggles to find a glimmer of hope. The same goes for the warm colors and the kaleidoscopic blur of the superb visuals obtained via tweaked vintage lenses and infrared emulations of aerochrome film developed by Yann Tambour himself during lockdown with photographer Jasmine Bannister. These are the glimmers of a world that we find hard to enthuse over and whose flame seems to wane a little more each day. So what can one do but row in slow motion, Towards a Waning Glow? Stop the rat race, like tragicomical puppets gesticulating against the current, or burn our fingers in frantic arpeggios, like Yann and Boubacar, to keep the flame alive. 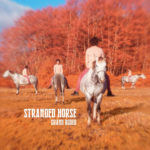