V/A
BACK FROM THE CANIGO VOL.2
LP

Here we are! Back for the second volume of Back from the Canigó ! In the same spirit as Back from the Grave, our goal is to look back at what happened in the South of France near Perpignan at the beginning of the 21st century.
As you can hear it in the first volume, the city of Perpignan (and its region, Northern Catalonia) has been a strong place for underground rock’n’roll for many years. In the 90’s, there were a lot of garage bands and an important mods community. These guys created a spirit in the city that’s still present today.
This volume showcases the new bands created by Perpignan’s city rockers and the country punks from the nearby villages. Bands like Les Gardiens du Canigou, The Ugly Things, The Likyds, The Toxic Farmers, The Vox Men, The Feedback, heard on the first compilation, spawned plenty of new formations.
This time the scene has its own labels – Nasty Products and Profet Record are two of them. It has never been easier to record music and put it on vinyl. There are live venues all over the city. The beginning of the internet also makes life easier, even when you’re in a town in the South of France near the Spanish border and the Mediterranean. Myspace is growing fast and local bands make contact with the other side of the Atlantic.
The Sonic Chicken 4 are signed by In the Red and Trouble in Mind. Parisian labels are also interested in the work of bands from Perpignan. The Hushpuppies, ex-Likyds, go to the capital and are signed by Diamondtraxx. They’re certainly the best known band of that era with their hit « You’re Gonna Say Yeah », featured on Guitar Hero and in several commercial ads.
Boosted by international touring, Catalan bands make their way into the world. The Fatals go on tour in Italy and Canada. The Sonic Chicken 4 are booked for a US tour while Jack of Heart, signed on Born Bad, play all over Europe. The whole world listens.
This is the story told by our compilation. Just put the needle on the record and let the music do the talking…

A1. Jack Of Heart – Love In Vain
A2. Les Bellas – Belladelic
A3. Sonic Chicken 4 – Do It Allright
A4. El Vicio – Longanisse
A5. Pablo Escobar’s Sons – Fuzz Rapid Fuzz
A6. Destination Lonely – Vanessa
A7. Migas Valdes – Marijuana 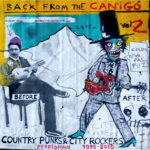