It would be short selling it to call PULP a collection of b-sides and rarities. Rather, it is a group of songs who have been patiently waiting their turn. “Happy Parasites” was at the top of the list when Born Ruffians entered the studio to record Uncle, Duke & the Chief in 2017 but it never made it into the sessions. “Husha” has been kicking around Youtube and various hard drives, a bootleg of sorts, for nearly ten years. “Heat Wave” is a head-bobbing, slow-burn banger that just needed a little more gestation time.

PULP, strained and separated for your convenience. You may now swirl them back into the eddying roil or consume each song independently. All we ask is you refrigerate after opening.

Heat Wave, Beyond The Lightning, Ring Finger, and Happy Parasites: produced, recorded, and mixed by Asher Gould-Murtagh and Born Ruffians in Toronto. 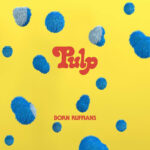