Eight distinguished artists wrote and recorded original pieces for this album which joins some dots between vintage, experimental & new ambient, and pays tribute to the relaunched Made To Measure composers’ series

Featuring, by order of appearance:

Benjamin Lew & Steven Brown (BE/US), with their first collab in over three decades

All tracks were made to measure for this album, and revolve around the loose idea of wordless fiction.

Aside from being such a seductive, fascinating collection of tracks and moods, the album is also modestly aiming at joining dots between certain classic ambient composers (represented here by Benjamin Lew & Steven Brown and Stubbleman, whose work has previously appeared in the Made To Measure series), artists who approach experimental ambient from their pop or club background (Lucrecia Dalt, Inne Eysermans, Matias Aguayo), and eminent exponents of the great new generation of ambient music composers (Kaitlyn Aurelia Smith, Christina Vantzou, Mary Lattimore, Félicia Atkinson).

The cover of Fictions is a reproduction of a painting by renowned Belgian artist Angel Vergara Santiago (two of his paintings were already featured on covers of early Made To Measure volumes, back in the 1980s).

‘Fictions’ was curated by Marc Hollander. 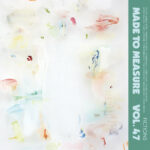