The sublime collaboration between Carwyn Ellis and Rio 18 strikes again, as the Welsh wizard of song whips up some more sumptuous Brasileiro beats topped off with a golden sauce of beautiful Brittonic, Cymraeg, y Gymraeg, lyrics – this time with the aid of the Welsh National Orchestra – stirred into the pot for added oomph. The resultant heady brew has been turning the heads of many a Balearically-minded listener: safe to say that Moonboots is a big fan which is probably all the bona fides you need right there.

There is a touch of genius in the entwining of those sun-kissed Bahian grooves with the lyrical allure of the Welsh language – so unexpected and yet so demonstrably right and proper – it works an absolute treat. Hats off to everyone involved for putting the two halves together and coming up with such a satisfying whole. The addition of the orchestra adds a whole new heft to the enterprise of course: the massed strings providing the lushest of beds for the sinuous grooves. Whether it’s the joyous, Jorge Ben-inspired Ola with its hints of the classic Ponta De Lanca, Africano, or the softer romanticism of Cariad, Cariad, the songs flourish in the space provided by the larger format, as they blossom into a wonderful architectural beauty. The strings and the horns embellishing rather than overpowering the small group dynamics. This is classy, assured songwriting given a turbo injection.

The whole album is a joy, and slots neatly into Ellis’s ever-expanding oeuvre. From fronting Colorama to working with Edwyn Collins and playing in The Pretenders, this is a man who spreads his musical net far and wide. He’s got the chops, without a doubt: but this venture may just be the best thing he’s done. The video for YnYs Aur pulls the curtain back beautifully: one man, a uke and the massed orchestral ranks combine in a perfect poetic union: this is spine-tingling stuff – the wonderful strings sounding more romantic than a season of Cary Grant films. 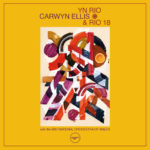