The Blaxound come from Barcelona and are the project around the insanely talented Marta Roman, who writes all songs herself, produces them in her own home studio and finishes them with the help of great musicians from the local music scene.
Especially hooked on the soundtracks of the Blaxploitation movies of the 60’s and 70’s she creates her sound and relies on high quality arrangements. The good feeling immediately floats over to you and leaves traces in your auditory canal. With nine mature tracks on their instrumental album The Blaxound shoots itself into the hearts of friends of instrumental funk and soul music. 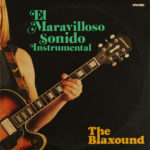