Wewantsounds is delighted to present the first retrospective on vinyl of Saravah Records, one of the most influential French labels founded in Paris by singer, songwriter and producer Pierre Barouh in 1966. Featuring Brigitte Fontaine, Jacques Higelin, Alfred Panou, and many rare tracks reissued on vinyl for the first time, the set gives a glimpse of the free-form, groovy sound of the label between 1965 and 1976. Supervised by Pierre Barouh’s son and Saravah historian, Benjamin Barouh, The 2-LP Gatefold set comes with a 4p insert featuring liner notes (Eng/Fr) by Benjamin plus an exclusive interview of Barouh’s partner Fernand Boruso by Jacques Denis telling fascinating anecdotes around the label.

Pierre Barouh is a legend in France. A gifted singer in the 60s, he became an icon with the Claude Lelouch film « Un Homme et Une Femme » in 1966 that made him a star. Indeed, in 1965 while in Brazil, on the insistence of Vinicius de Moraes, he records ‘Samba de Bênção’ on a small revox with Baden Powell, retitled ‘Samba Saravah’ and played it to his friend Lelouch who fell in love with the song and decided to use it in the film. Barouh plays his own character in it and also wrote the score with composer Francis Lai. The rest is history: The film and the score became huge hits. ​But instead of cashing in on this success, Barouh decided to set up a record label and a recording studio with his old friend Fernand Boruso. Its name: Saravah.

​Through their film connections, came Brigitte Fontaine and Jacques Higelin who were already making their marks in the French underground and had recorded the song « Cet Enfant Que Je T’avais Fait » for the 1968 film « Les Encerclés ». Saravah signed them on the spot and the song, arranged by Jean Claude Vannier, which would become a cult classic, appeared on Fontaine’s breakthrough debut album « Brigitte Fontaine Est… Folle » Fontaine would go on to record several albums for Saravah – often with her partner Areski Belkacem – including « Comme A La Radio » in 1969 with Art Ensemble of Chicago. The latter are also featured on ‘Mystifying Mama’ by Marva Broome and ‘Je Suis Un Sauvage’ by Alfred Panou, an African actor and singer who’d worked with Jean-Luc Godard.

​Pierre Barouh pioneered Music from Africa and Latin America as he’d spent time in Brazil (in 1969 he directed ‘Saravah’ a fascinating documentary about the Rio music scene with Maria Bethania, Paulinho da Viola and Pixinguinha). He released two albums by Gabonese artist Pierre Akendenge, whose ‘Orema Ka-ka-ka’ from the 1976 album ‘Africa Obota’ is featured here.

The set also features rare singles by Beartrice Arnac (then Boruso’s girlfriend) with the jazzy ‘Le Bruit et le Bruit’ and Jacques Higelin’s ‘Je Jouais le Piano’, one of the first songs recorded for the label and which has never been reissued since. The set ends with a haunting duet between Pierre Barouh and Baden Powell, recorded in 1965 during the same Rio session as ‘Samba Saravah’.

Fernand Boruso, called “Fern” left in 72. After a few successful years, the label went into decline and would never capture the energy of the beginnings. Saravah would nonetheless leave a fascinating body of work whose influence keeps growing over the decades. Pierre’s Son, Benjamin, has been preserving the label’s archives for 30 years and is working on a new documentary “L’État de Vacance” on Saravah in the 70s, out soon. 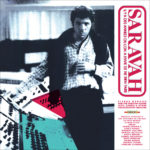