‘Beyond The Willow Tree’ is a hauntingly anthology of folk songs chronicling the experience of a young black man growing up in the segregated south. A balanced mix of covers and originals, Cleveland Francis’ body of work seamlessly blends deep, soulful vocals with the stripped down acoustic instrumentation of folk. In the late ’60s Francis coined the term ‘soulfolk’, playing his genre bending music across college campuses and coffee shops while earning a medical degree at William & Mary. This 21-track double LP anthology has been restored and remastered from the original master tapes. It includes Francis’ debut release ‘Follow Me’, as well as a second record featuring unreleased and never before heard covers and demos from 1968. Liner notes written by Cleveland Francis and Forager Records.

Cleveland Francis, the stalwart of US black folk, coined the term « soulfolk » to describe his uniquely bleak style of acoustic music. Growing up and coming to prominence in the state of Virginia, he rarely missed an opportunity to play at every college campus, coffee shop, bar and odd corner he could find. Now some of his earliest and most important recordings get compiled into this double 21-track anthology, ‘Beyond The Willow Tree’, which, like no other, does wonders in chronicling the experience of black segregated youth in the 60s and 70s. 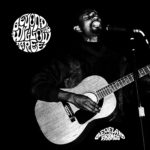