Curley Page for some, Sly Williams for others, difficult to follow his career and in definitive, little is known about him despite his “big deal” recently approved by blues specialists : Cleo Page IS the man who wrote and recorded the original Boot Hill, a blues classic covered many times up until now.

Cleo Page who lived in California since 14 years-old has been crossing Blues, Rhythm & Blues and proto-Rock’n’Roll in a personal way. He will run his own labels in the heart of Watts just after the 1965 riots. Those tragic events deeply influenced his laid-back groovy sounds, powerful guitar playing, organ-driven garage Blues with strong political and social messages. Somewhere between the first electric recordings of Howlin’ Wolf and… Black Diamond Heavies! 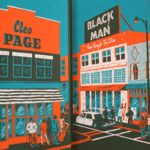